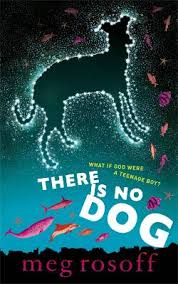 I don’t normally do real book reviews here, apart from Marvelous Middle Grade Monday. The blogosphere is inundated with YA book reviews and thus I stick to my pithy book-tweets to let the world know how I feel about what I read.

But I’m going to make an exception for THERE IS NO DOG by Meg Rosoff. This book has one of the cleverest premises I’ve heard in a long time: ‘What if God was a teenage boy?’ The sheer ridiculousness of this premise, coupled with my penchant for both teenage boys and irreverence towards theism made this book seem like a natural choice for me. Well, I was slightly disappointed.

So what, right? Not all books resonate with me. Why does that warrant a whole rant about it? The fact is the book is well written with pithy clever prose, and a pretty good structure overall. Rosoff chose to use a very messy omniscient point of view, which was distracting. But maybe she did that as a little joke. OMNISICENT. Get it?

Perhaps she was aiming for Douglas Adams, a lofty goal indeed, and I can’t really fault her for not quite reaching it. The book is funny, but could be funnier. It’s irreverent, yes, but could be more so.  There are too many characters, none of which is developed as deeply as they could be.

Even that is not enough for me to go all NYT book review on it. What bugged me, what really niggled me in my most sensitive niggle zone is that there is only ONE teenager in this book and he’s a stereotype of all the things I rail against in my support of teenagers. OK, so this teenager is God, and if there was a God he WOULD, in my opinion, be feckless, self-centered and inconsiderate, so yes, it makes perfect sense that “God” (of Bob as he’s called in the book) would be thus, but it grated on me.

Teenage boys, despite widespread belief to the contrary, are not all feckless, self-centered and inconsiderate. It’s not that Bob was unlikeable; I rather liked him (more than I might like God, certainly) but he was unredeemable and that just didn’t sit right with me. The conclusion of the book felt lazy. The whole thing felt lazy, as though it was something Rosoff knocked off while on a cruise, drunk on daiquiris and sizzling in the sun.

I guess what I’m saying is that if this is an allegory about what an unbelievably heartless cad God is, then comparing him to a teenage boy felt a little cheap. Like how calling someone an ass is an insult to donkeys.

I just think insulting teenagers in a book for teenagers is not nice. And this book insults teenagers. Because if a teenage boy DID create the world, there would be much more sex, food, music, sports and TV, and a whole lot less disease, work, school and tears. And colors would clash, rivers would run with beer and the sky would smell like girls’ hair or bread baking, or both.

I’d trade one of my nephews for God any day.