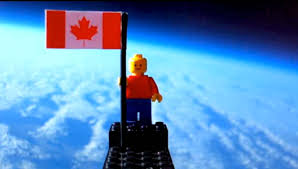 I know, it sounds kind of like a really cool YA for boys book, and I completely wish it was. But, even better, it’s real! Yes, Canada officially sent a Lego Man into space. Well, it wasn’t official exactly, in that the Canadian government wasn’t exactly involved, apart from paying for the these terrific teens’ schooling, and any medical care required should the mission result in injuries (it didn’t).

$500 people! We Canadians are a thrifty bunch and these two 17 year olds proved it. They sewed! They glued! They gave the Lego man a little Canadian flag! For sheer audacity and the best Lego hack I have ever seen, you two are officially TERRIFIC.