Ever read a book that makes you want to give up writing because you know you’ll never write anything even half as good? PERSONAL EFFECTS, the debut novel by E. M. Kokie is such a book.

After his older brother dies in Iraq, Matt makes a discovery that rocks his beliefs about strength, bravery, and honor in this page-turning debut.

Ever since his brother, T.J., was killed in Iraq, Matt feels like he’s been sleepwalking through life — failing classes, getting into fights, and avoiding his dad’s lectures about following in his brother’s footsteps. T.J.’s gone, but Matt can’t shake the feeling that if only he could get his hands on his brother’s stuff from Iraq, he’d be able to make sense of his death. But as Matt searches for answers about T.J.’s death, he faces a shocking revelation about T.J.’s life that suggests he may not have known T.J. as well as he thought. What he learns challenges him to stand up to his father, honor his brother’s memory, and take charge of his own life. With compassion, humor, and a compelling narrative voice, E. M. Kokie explores grief, social mores, and self-discovery in a provocative first novel

I picked up an ARC of this at ALA after a friendly twitter discussion with the author on the subject of tiaras (I was for them, she was against, for the record). I had read the blurb for PERSONAL EFFECTS and it sounded interesting, and like the type of thing I have been enjoying lately: boy POV, contemporary, angsty. I thought I’d like it

Well I was blown away by this. The writing is perfect, making the story flow along at a fast clip without being too light for the subject matter. The characters are real and well developed.  The protagonist, Matt is just the right blend of teenage apathy and drive. Once he settles on his goal, to learn more about his dead brother, he is a force.

The supporting characters, Matt’s father, his best friend and crush, Shauna, and the dead brother, T.J are all complex and dimensional. The way they fit into Matt’s journey make the cast of this book one of its strengths.

It’s a darkish book, but not in a pointless or self-indulgent way. Matt’s family life is seriously flawed, he has major anger issues and is a poor student. His friendship with Shauna is on a knife’s edge because of his growing romantic (and sexual) feelings for her. All this tension is dealt with very candidly – there’s a lot of swearing, violence and plenty of talk of erections and breasts. It’s probably not going to get into middle school libraries, but high school kids will love it.

The premise of the book – that Matt discovers he barely knew his brother when he investigates the “personal effects” the army returns to him after he is killed in Iraq – conceals a deeper issue, and conceals it so well that when it began to sneak up on me I experienced a certain amount of denial. In the end I really had no idea where the story was going to go and was surprised and moved by the conclusion.

Reviewers on Goodreads are already touting this book for  a Cybil nomination or a William C. Morris YA Debut Award. I’d like to add my voice to this movement. PERSONAL EFFECTS is a superb book. 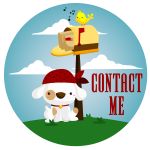 #authors of #bookstagram Do you struggle to make professional looking graphics for your book promotion? Did you know that you can get easy to use and attractive templates from lilymeade.com? There are dozens of templates for things such as bookmarks, social media, posts banners, postcards, Promotional graphics for launches, sales, and much more. The prices are very reasonable. And the graphics are attractive and easy to use. Find them at lilymeade.com/writers-shop