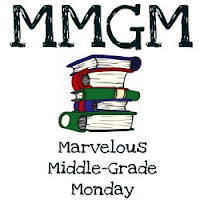 Marvelous Middle Grade Monday is a meme started by Shannon Messenger as a way of celebrating middle grade books on the web. Check her blog for a list of contributing bloggers each week.

This week for MMGM I’m going to remind you all of a great trilogy for confident middle graders, THE SEA OF TROLLS by Nancy Farmer. Like RANGER’S APPRENTICE the SEA OF TROLLS is a fantasy adventure series that is not too dependent on magic. While there is sorcery and spiritualism in these books, they are more about straight out adventure with lots of fighting and being dashed about on Viking ships.

Here’s a blurb from Goodreads: At the center of this massive adventure is a small Saxon boy named Jack, who’s never been much good at anything until the Bard of his medieval village makes him an apprentice. Then, just as Jack is learning to tap into and control his power, he is kidnapped (along with his little sister, Lucy) and taken to the court of King Ivar the Boneless and his half troll queen Frith. When one of Jack’s amateur spells causes the evil queen’s beautiful hair to fall out, he is forced to undertake a dangerous quest across the Sea of Trolls to make things right, or suffer the consequences–the sacrifice of his beloved sister to Frith’s patron goddess, Freya. Along the way Jack faces everything from giant golden troll-bears to man-eating spiders, yet each frightening encounter brings wisdom and understanding to the budding young Bard. No quester who enters these pages with Jack will go away unsatisfied. Farmer’s skillful melding of history, mythology, and humor, is reminiscent of both Tamora Pierce and Terry Pratchett’s medieval fantasies, and will no doubt be HUGELY enjoyed by fantasy readers of all ages.(Jennifer Hubert)

The follow up books, THE LAND OF THE SILVER APPLES and the ISLANDS OF THE BLESSED are just as action packed and round out the series nicely. Like all of Nancy Farmer’s books, these are long, dense and complex. I describe them to readers as a “big commitment”. But they are worth it in the end. SEA OF TROLLS  is 108,000 words (!!) with a reading level of about grade five to six. Best of all check out the wicked covers!

5 thoughts on “MMGM : THE SEA OF TROLLS by Nancy Farmer”